Towards the Digital Transformation of Quebec Retailers

Towards the Digital Transformation of Quebec Retailers

Montreal (Quebec), April 6, 2021 – This morning, the President and CEO of the Quebec Technology Association (AQT), Ms. Nicole Martel joined the Honourable Mélanie Joly, Minister of Economic Development and Official Languages of Canada, and Mr. Pierre Fitzgibbon, Minister of the Economy and Innovation of Quebec, to announce the funding of a project aimed at accelerating the digital transformation of Quebec retailers.

The Digital Transformation Project for Retailers

The main objective of the project is to empower Quebec retailers to initiate and propel their online business activities to their full potential. It intends to leverage the expertise of its members, offering technological solutions to this important sector of our economy.

Concretely, the AQT will offer customized support to Quebec retailers to:

To implement this project, the AQT has partnered with the École des entrepreneurs du Québec (ÉEQ) in order to offer personalized support to retailers in the development of their digital skills.

This program is aimed both at retailers who already have an online presence and want to accelerate their transformation, and at those who are just beginning their digital revolution.

Thanks to the backing of the Quebec and Canadian governments, nearly 5,000 retailers will be supported.

To achieve the desired impact, the AQT will work with representatives of the retail sector who are already mobilized, such as the Conseil québécois du commerce de détail (CQCD), the Retail Council of Canada, the Metropolitan Fashion Cluster, all organizations that are convinced of the importance of their members’ digital transformation.

Stay Informed of the Next Steps

Over the next few weeks, the tools for welcoming and supporting retailers will be put in place. Until the official launch, we invite you to visit our website for more information and to subscribe to our mailing list for exclusive updates. 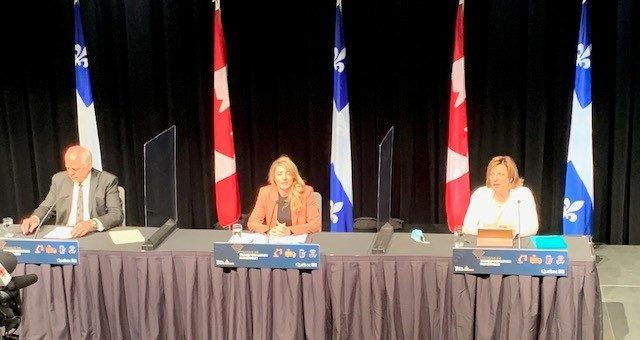 “I’m extremely pleased that AQT can take part in this important project which aims to help our retail businesses accelerate their digital transformation. It is indeed a great source of pride that Quebec technologies will be leveraged to play a key role in the Digital Transformation Offensive in Quebec announced by Minister Fitzgibbon last week and supported by Minister Joly within the framework of the federal government’s stimulus plan.”

“As part of the Digital Transformation Offensive, this assistance will accelerate the transition of our local retailers towards a digital economy, allowing them to compete with large online chains. The digital shift of retailers who will be supported by AQT is one of the initiatives that will accelerate the Quebec retail sector’s transition to the new economy.”

“Along with my Quebec counterpart, Pierre Fitzgibbon, I’m very proud to announce $9 million in funding for AQT and EEQ. They are drivers for innovation in Quebec and it is largely through technologies and digitization that our country will be able to recover economically. We are aware of the difficulties our business sector experienced during the pandemic, and our government will always be there to support and help Canadian and Quebec industry move forward, while supporting the creation and retention of good jobs, particularly in these more difficult times.”

The Quebec Technology Association (AQT), the essential business network for tech companies, provides executives with a stimulating, world-class environment for their business and industry to grow. With its 500-strong membership, it brings them together and allows them to enhance their organization’s performance. A self-funded non-profit organization, AQT acts as representative and advocate for the industry in decision-making bodies. AQT is one of the Top 10 tech associations in North America.