In an industry at the heart of the digital shift, where opportunities must be captured with agility and often with the help of partners, networking is a must. But what would these evenings be without the possibility of extraordinary exchanges or extraordinary meetings? 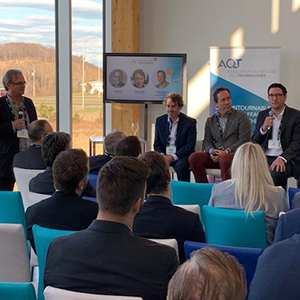 This is how our these meetings have become, over the years, recognized and esteemed networking venues, now a part of the agenda of hundreds of tech leaders. In total, more than 350 companies from all over Quebec took part in these events in 2018-2019. The evening held on May 7 at the Innoparc Lévis marked the end of this series, which will certainly be renewed next fall.

Already thinking about the next season (and thinking at the same time of new ways to refine our formula), we have seen how much this year was rich in milestones.

How do these networking opportunities offer something so special ?

For the benefit of those who have never had the opportunity to take part to these events, they present a talk show portion based on the generosity of techno entrepreneurs willing to share the ups and downs of their journey to the audience. Breakthroughs and pitfalls, lessons learned, mistakes to avoid, examples of successful collaborations, everything is approached interactively through masterfully directed interviews by our faithful accomplice, columnist and business journalist, René Vézina. Everything is obviously followed by a question period with the crowd. 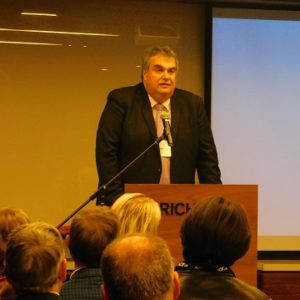 We had never seen so many hands raised during a question period, only after the moving testimony of Alain Lavoie, the CEO of Irosoft, who accepted to open the show last fall. “Mr. Lavoie, your business is an inspiration. You knew how to build something strong and beautiful. How do you plan to prepare for the next generation? “Alain, you managed to work on major projects with foreign governments. What advice would you give to an entrepreneur who would like to make his mark on international public markets?

Alain Lavoie’s testimony has not only imbued us with the dynamism of Irosoft, a “start-up in the soul that will soon be celebrating its 25th anniversary”, and who is a recognized leader in the Canadian artificial intelligence ecosystem. he has also left us the memory of an entrepreneur who distinguished himself by borrowing with heart the paths that seemed to him the most just. A look in the rearview mirror, and we evoked his encounter with mathematics and his partner, both of which changed his life trajectory. A look forward, and we found that Irosoft had been able to draw an enviable course, on a field on which usually play only very large companies.

The art of quickly gaining the trust of major companies 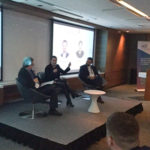 In this respect, the expertise of Quebec tech SMEs is sometimes so strong, and developed with such a high degree of agility, that it is not uncommon to see them gain the trust of very big players. This is what has propelled the CEOs of the companies IN-RGY and Dialog Insight, both in the spotlight on March 20.

From their interview with René Vézina, we remember: the possibility of managing the rapid growth with a meticulously prepared plan, the refusal to compromise on quality and, above all, the audacity to take calculated risks.

We especially remember the exceptional entrepreneurial spirit of Pascale Guay, co-founder of Dialog Insight, who, from executive secretary to self-taught CEO, seized opportunities to develop a marketing platform and develop a prestigious clientele in Quebec, Toronto, France and Russia. From Thierry Bodson, CEO of IN-RGY, we remember the realization of the “desire to do more and do better”. After 10 years of growth, with more than 120 employees serving 150 corporate clients across North America and Europe, he has generously laid out the course of action that has helped him make a difference: focus on human values, resolve to hire only the very best resources, and create an unbeatable team.

Company values that stand out

As one of the participants rightly pointed out: “Sylvain Simpson’s presentation focused directly on the main IT issue we face today: how to improve our employer brand to facilitate the recruitment and retention of key talent. I left the evening with many thoughts and good ideas in mind, but especially with the conviction that we must constantly review our ways to optimize our competitiveness. This was an excellent conference! »

An opportunity to celebrate the builder’s DNA of our entrepreneurs

Finally, on May 7, at the Innoparc Lévis, AQT members were fortunate to meet on stage, for a second time, and after a first visit very much noticed in Montreal last winter, the three CEOs who competed for the CEO of the year AQT-Investissement Québec award in 2018. Culminating each year at CEO Vision, this prestigious award celebrates the our entrepreneurs, who have distinguished themselves by proposing inspiring growth models for their peers.

This very exceptional presentation offered a chance to gain insights on the paths of Renaud Lavoie (Embrionix), Joé Bussière (Libéo) and Martin Thériault (Eddyfi). The extraordinary inventiveness of entrepreneurs found in Renaud Lavoie an eloquent example. With two highly recognized digital innovation centers, Joé Bussière offered a model of an unique business culture. As for Martin Thériault, CEO of Eddyfi, we had the chance to learn more about the exploit of completing 6 acquisitions in no less than 32 months.

On numerous occasions throughout the series, René Vézina emphasized the eloquence of the guests, as well as the tonic optimism of the leaders of the sector. In an industry that grows 2x faster than other industries, the most recent edition of our Barometer of Competitiveness revealed that more than 80% of leaders expected an increase in their revenues over the next year This series will therefore certainly allow us to approach other inspiring journeys, all while also offering networking opportunities of high quality to develop business, benefit from generous exchanges between peers and, who knows, seize new business opportunities!