AQT-Investissement Québec CEO of the Year Award 2019 François Dion, CEO of Levio, elected by his peers

HomeAQT-Investissement Québec CEO of the Year Award 2019 François Dion, CEO of Levio, elected by his peers

AQT-Investissement Québec CEO of the Year Award 2019 François Dion, CEO of Levio, elected by his peers

François Dion, CEO of Levio, elected by his peers

TREMBLANT, Thursday February 21, 2019 – Business executives participating in Vision PDG, the annual event for technology business CEOs in Québec, recognized François Dion, CEO of Levio, as the winner of the AQT-Investissement Québec CEO of the Year Award 2019.

Mr. Dion was honoured at the 17th edition of the competition after standing before his peers and securing his candidacy. Following the application process, this prestigious designation is awarded as a result of a selection procedure that is based on both a score chosen by an independent jury (counts for 30% of the total score) and by peer vote (70% of the total score). The voting process is overseen by SOM Research and Surveys, an independent survey firm.

This nomination by peers gives the CEO of the Year Award tremendous value. It is a source of recognition and great pride for the winner, whose hard work and competency is celebrated by all of his colleagues.

“A company’s success hinges upon the leadership and vision of its decision-makers. For that reason, we are proud to have been involved in this prestigious honour of CEO of the Year for nearly 14 years. Without a doubt, this award is a source of inspiration for the technology community in Quebec. We are so pleased to be able to recognize and celebrate the entrepreneurs who are making a difference and helping to build a strong and vibrant economy. We extend our congratulations to Mr. Dion for his leadership. This recognition is well deserved”, stated Pierre Gabriel Côté, President and CEO of Investissement Québec.

“Congratulations to the winner. Through his leadership, he contributes to the impact of our industry and is an inspiration for his peers. This unique award reflects the spirit of solidarity and collaboration that drives the AQT’s business network. Year after year, we are always impressed by the level of commitment and the continual success of these leaders. The outstanding quality of the applications submitted can attest to the vitality of our companies and, collectively, with our 155,000 jobs, we can be proud of the industry’s contribution to the Québec economy,” concluded Nicole Martel, President and CEO of the AQT.

The evening’s participants also applauded the achievements of the other two finalists, Mrs. Katie Bussières, CEO of Nubik, and Mr. Martin Roy, CEO of Christie Innomed. 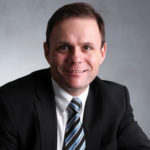 François Dion is a visionary and inspirational entrepreneur whose evident leadership drives Lévio ever higher. The outstanding growth the company reported in its initial years of operation is a clear testament to its founder’s dynamic approach. The company’s actions have always been rooted in innovation, both in its internal management as well as the way Lévio delivers its client services. Mr. Dion has surrounded himself with highly competent, energetic people who are fully committed to Lévio’s success and dedicated to achieving even greater heights.

About the AQT-Investissement Québec CEO of the Year Award

The AQT-Investissement Québec CEO of the Year Award is presented to the president of a tech company who has distinguished him or herself through his or her leadership and contribution to the standing of the industry in Québec. Since 2003, the AQT has proudly organized this competition and the prize is awarded as a part of Vision PDG, in partnership with Investissement Québec, which has been presenting this prize for 14 years.

The Quebec Technology Association (AQT), the inescapable techno business network, provides executives with a stimulating and world-class environment that is conducive to the growth of their business and industry. With its 500 members, it brings them together, thus enabling them to increase the performance of their organization. A self-funded non-profit organization, the AQT represents the entire industry in decision-making bodies and is among the top 10 techno associations in North America.